The son of Jamaican immigrants, Colin Powell was born in New York's Harlem in 1937 and was raised in the South Bronx. His father was a shipping clerk, and his mother was a seamstress.

Powell's parents worked hard and stressed the importance of getting an education. He graduated from high school in 1954 and attended City College of New York (CCNY). He seemed to find his calling in the Reserve Officer Training Corps, attaining the highest rank of cadet colonel. Upon graduating in 1958 with a degree in geology, Powell was commissioned a second lieutenant in the U.S. Army.

After finishing the Army's Infantry, Airborne, and Ranger Schools, he was assigned to Germany, where he served as a platoon leader, executive officer, and rifle company commander. Powell did two tours in Vietnam, first in 1962 as an adviser to a Vietnamese infantry battalion and again in 1968 as an infantry battalion executive officer and assistant chief of staff for G-3, 23rd Infantry Division.

During his second tour, Powell won the Soldier's Medal for rescuing several fellow soldiers after a helicopter in which they were flying crashed and caught fire. Returning home, he earned an MBA from George Washington University, and the following year he was among 7 of 1,500 applicants selected as a White House Fellow. He worked for Caspar Weinberger, then director of the Office of Management and Budget, and for Weinberger's deputy, Frank Carlucci.

In 1977, Powell returned to Washington to serve at the Pentagon. Four years later, he became assistant division commander for operations and training of the 4th Infantry Division. In 1983, he served as senior military assistant to Weinberger, who by then had become secretary of defense.

In April 1989, Powell moved to Atlanta as head of the U.S. Forces Command until President George H. W. Bush called him back to Washington to head the Joint Chiefs of Staff. He was the youngest, and the first black, American ever to hold that position.

In September 1993, Powell retired after 35 years of Army service. In 1995, he published his bestselling autobiography, My American Journey. In 1997, he founded the America's Promise Alliance, which is dedicated to helping children get the fundamental resources they need to succeed in life.

In January 2001, Powell was sworn in as the 65th secretary of state under President George W. Bush, serving in that capacity until January 2005. Powell also became honorary chair of the Colin L. Powell School for Civic and Global Leadership at CCNY, his alma mater. The school bearing his name was inaugurated May 2013.

Although Powell served at all echelons of the military, at the White House, and at the State Department, this soldier-statesman never lost his common touch and his love for the American soldier. Over the years, Powell developed a number of rules to guide his life, such as "share the credit, remain calm, be kind, and have a vision." He added to that list of rules: "And never let your ego get so attached to your position that when your position goes, your ego goes with it." Powell's 2012 book, It Worked for Me, expanded on these rules revealing the lessons that shaped his life and career. 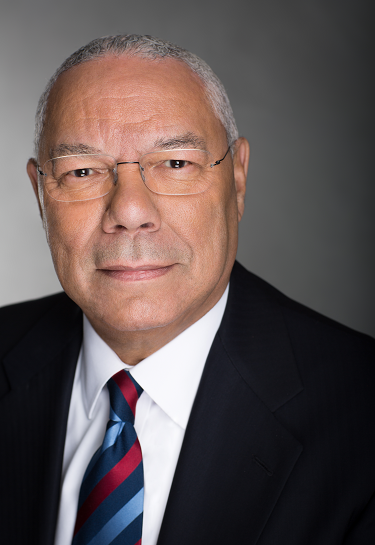