Charles Anderson was born in 1934 in Florence, Alabama. At the age of 14, Anderson's father left school to help support the family by selling newspapers to out-of-town construction workers from a newsstand that he built out of piano boxes. "They were in town to build the Wilson Dam," says Anderson. "My father was fulfilling a need because the workers wanted to read about what was happening back in their hometowns. He did well with the newsstand, and within a few years he was able to invest his profits into a small storefront newsstand, and he began selling magazines wholesale to the local drugstores."

Anderson's mother worked alongside her husband in the store, as did their son. By the time he was five, Anderson was able to make change for customers. "Our lives were always about business," he says. "I liked business, and I liked making money. You could sell a newspaper for a nickel. You could sell a magazine for a dime. We didn't have a lot of money in those days, but I didn't really know that. We were a working family, and working in my family's newsstand just seemed natural to me."

Anderson had great respect for his parents. They were loving and kind, and they gave him a rewarding childhood. He loved to fish in the creek a mile from his home whenever he could, and during those lazy afternoons, he often thought about his future. He knew from the beginning he wanted to be a businessman. He couldn't imagine doing anything else.

Entrepreneurial in spirit, Anderson spent a lot of time trying to think of ways to make money. He had a newspaper route, he mowed lawns for a while, and he then started a fireworks business at the age of 12. Because it was illegal to sell fireworks in town, he set up a stall near a grocery store on the edge of Florence. "This was the first time I ran my own business," he says. "Little did I know it was just the beginning."

It was always expected that Anderson would go to college, but he assumed he would go on a football scholarship. He was co-captain of his high school team, but then he broke his ankle in a game, ending his hopes for a scholarship. At the same time, he was in love with his high school sweetheart, Hilda. "I was graduating and knew I'd be going off to college, but Hilda still had another year of high school," says Anderson. "We were both only 17. Worried that someone else would take her away, I proposed to her, and she accepted. I had saved most of my earnings up to that point and had $3,500 in my savings account. So I was a married college freshman, and Hilda was a married high school senior."

Anderson attended the University of North Alabama (UNA), where he majored in business. In addition to helping with the wholesale side of his father's news business, he worked as a laborer at the nearby Reynolds Metals Company, which paid five times what he had been earning up to that point. Impressed by his strong work ethic, Reynolds asked Anderson to take a test to see if he was management material. Shortly before Anderson's college graduation, the Reynolds plant manager stopped by to see the young couple at the home they had purchased two years before for $4,500. By then, at the age of 21, they were the proud parents of two-year-old Charlie. The manager told Anderson that he had done very well on the test and that Reynolds wanted to send him to Richmond, Virginia, for management training.

Anderson's father discouraged his son from accepting the offer. Rather, his father offered to sell one-third of his business to Anderson, on condition that Anderson pay back the loan using future profits. "That was a difficult decision for me," says Anderson. "The Reynolds salary was much more, but I had an idea about expanding our product line in my father's business, and I felt certain I could increase the profits, which at that point were $25,000 a year. Hilda and I talked it over for a few days, and I finally decided to accept my father's offer. It launched my life in a direction that had no certainty, but it was the right decision."

Under the deal, Anderson moved into the office of his father, who would be available for advice if he ever needed it. "I didn't go to him very often," says Anderson. "He was an entrepreneur and was running a hotel and restaurant business and was pursuing other interests."

That arrangement in 1956 left Anderson with two newsstands and three wholesale trucks that distributed magazines and books throughout northern Alabama. His brother, Joel, who is 10 years younger, began working with Anderson full time in 1965.

At first, the company's newsstands sold fireworks during the Christmas season. The fireworks business later expanded to include wholesale. In 1962, Anderson began importing fireworks and other merchandise, and two years later, he formed a sourcing company in Hong Kong that became one of the largest exporters of Chinese fireworks. Anderson was one of the first U.S. business leaders to be invited to trade with China in 1972, immediately after President Nixon's visit.

All business segments grew rapidly in the 1970s and 1980s; in 1992, his bookstore division, Books-A-Million, Inc., became a public company. Under Anderson's leadership, four separate companies have emerged: Anderson Media, one of the largest distributors and merchandisers of music, DVDs, and books in North America; TNT Fireworks, the nation's largest distributor and merchandiser of fireworks; Books-A-Million, the nation's second-largest bookstore chain; and Anderson Press, a book publisher that focuses on the numismatic and sports markets.

Anderson has often been asked how the business went from selling magazines and books to the four separate entities. Actually, all the businesses grew from the original newsstand and wholesale newspaper and magazine business. The wholesale magazine company sold sparklers to chain stores in northern Alabama, later supplying all Woolworth outlets in the southeastern United States. This chain business led the magazine company to spin out the sparkler and fireworks business into TNT Fireworks. The early company also supplied a large bookstore in a Huntsville, Alabama, shopping center. Buying that store, along with the original Florence newsstand that had become a full-line bookstore, the company began to expand into bookstores, spinning them out into a new company called Bookland, later known as as Books-a-Million.

After decades at the helm, Anderson became chairman emeritus of the companies founded by his family. His four sons, Charles Jr., Terry, Clyde, and Harold, learned the family businesses and developed a strong work ethic, and each became CEO of a different division; under their leadership, revenues grew substantially.

Anderson says that for him, success is happiness. "I decided a long time ago that making a lot of money does not make you happy, but not making enough money does make you unhappy. For me, happiness is faith, family, and serving others. The best thing that ever happened to me was marrying Hilda. We've been together for 62 years. She raised our sons, and I'm very grateful for what we have shared over the years."

Anderson concedes that although it seems his road has been smooth and without difficulty, such is not the case. "We had difficulties along the way," he says. "Things didn't always go our way or the way we wanted. But we saw it all through, and we've been very blessed. No matter how much business success we have had, however, our sons and family have meant the most to us. Twelve years ago, our youngest son, Harold, was in a skiing accident. The surgery on his knee was successful, but he got an infection afterward and has since lost his leg. The way he has handled this situation has been amazing. He continues to work and run his business. So life doesn't always go the way you expect it to, or want it to. My advice to those who are facing tough situations is to have faith in God and faith in yourself, your family, and your abilities."

A dedicated leader in his community and beyond, Anderson has served on the boards of the U.S. Space & Rocket Center, First United Bancorp, and the Heritage Trust Fund. He was also a charter member of the Shoals Economic Development Authority Board. He was UNA Alumni of the Year in 1979. A longtime supporter of the Salvation Army, Anderson served on its national advisory board. He was inducted into the Alabama Business Hall of Fame in 2002 and into the Alabama Academy of Honor in 2011. He was a member of the president's cabinet of both UNA, his alma mater, and the University of Alabama (UA). With a shared interest in education, the Andersons made many contributions to universities, schools, and other charitable causes.

"College is more important today than ever before," says Anderson. "I think it's harder to accomplish what you want in life without a good education. And now you often need a graduate degree to get a real start. If you want to succeed in life, and if you are entrepreneurial and want to start a business, then you need the tools to make that happen. Getting a good education is the place to start, and there is no substitute for hard work." 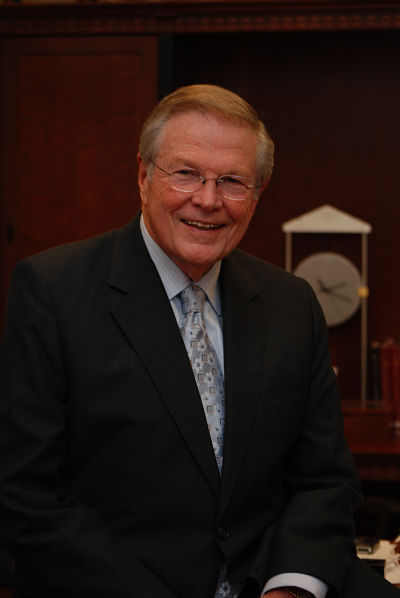